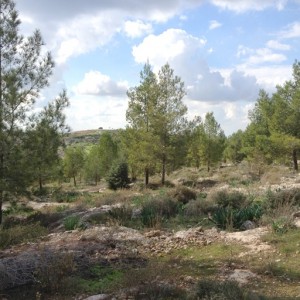 A Biblical mound which gave the park and the valley at its feet their name ("Ayalon Park", and "Ayalon Valley").

The Ayalon Valley became famous as the place where a solar eclipse occurred in the middle of a battle between Joshua and Canaanites (Joshua 10. 12: "Sun, stand still over Gibeon, and you, moon, over the Valley of Aijalon.").

During the time of the Crusaders a fortress was built on Tel Ayalon, named "Castellum Arnoldi", and later an Arab village by the name "Yalu" existed here, until 1967.

The ancient site has not yet been excavated, but a survey found the remains of the Crusader fortress on the spot.

In the valley east of the mound a spring house from Roman times can be seen, Bet HaKshatot ("The arched building").

Danny Herman - Private & VIP Tours, Archaeological Expertise
3
Modiin General
Private and VIP tours to all of Israel, by an archaeologist and a tour guide. 15 years of experience and many recommendations. Lecturer at the Hebrew University, IDC, and Tour guide courses
Viewing Point on Tamar Trail
10
Park Ayalon-Canada
Hill at the eastern edge of Park Ayalon-Canada with a variety of wildflowers and stunning panoramic views towards the east, north and west. The easiest access is via a track through the almond groves just before Mevo Choron, with thousands
Park Ayalon-Canada
9
Park Ayalon-Canada
Rich in natural woodland, planted forests and contains many intriguing historical sites. Ayalon-Canada Park, named after the Ayalon Valley and in honor of the donation from Canadian Jewry for its founding, stretches across 7000 dunam north