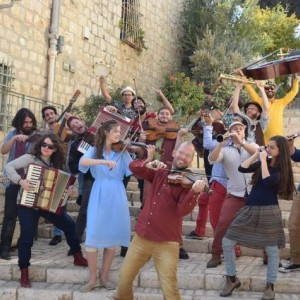 Modiin Maccabim Reut's great music celebration, in the shadow of the Corona virus.

The Tzlilei Stav Music Festival is celebrating its 20th anniversary, taking place during a magical musical weekend around the city, with a variety of shows, ensembles and styles for children, youth, adults and the whole family.

In a change from previous years, many musical ensembles will wander through the streets, city neighborhoods and shopping centers, to help local businesses.

Popular and well-known pieces in a magical duet of saxophone and guitar, that will leave you wanting more.

Magical Brazilian music to the rhythms of Bossa Nova and Samba. Well-known Brazilian songs (in the original language).

Perla, the wandering clown, in a nostalgic show for all ages. Elvis Presley, Frank Sinatra and many more, translated into Hebrew and performed with love. Accompanied by Uri Noaz on drums and Sergei Borkov on saxophone.

Authentic Greek music and contemporary Israel music together create an exciting and upbeat show that warms the heart.

Cheerful and lively street show of Jewish music from all eras. Happy celebration full of humor and love.

Optimistic classical music - selected moments of joy in classical pieces from the Baroque period and up to today.

Popular hits in a wide musical range, in refreshing arrangements and in the beloved group's distinctive groove.

Duo performing instrumental music in an oriental style on Oud and Kamancha. The performance combines music with Arab tones, with popular songs in fresh arrangements.

Musical ensemble with a flavor of the roaring 20s. Israeli and foreign pieces performed on special instruments that portray the sound and color of the period: trumpet, banjo and washboard. A show that gives you a taste of yesteryear.

Vivaldi, Wilensky and in between. The Raanana Symphonette with a unique connection between the world of classical music and the new and contemporary.

Location: Around the piano on the boulevard in the city center, Dam HaMaccabim.

Tunes and songs from the Jewish village, songs of Eretz Yisrael and ethnic music in a happy show that will have you dancing.

From Peru to Mexico - folk music from the Andes. The members of the orchestra are dressed in colorful ponchos, filled with joy and sweetness of nature, and accompanied by the melodies of zamponas, guitars and bass drums.

Balkan ensemble combining groove, funk, klezmer music and anything that moves the soul.

Location: Streets of the Prachim neighborhood.

Location: Streets of the Prachim neighborhood.

Woodwind band marching to the sound of trumpets, drums and dancing! The show is presented by "Nadav the Gypsy", the ensemble's saxophone player who carries a megaphone and entertains the audience.

Great Greek classics in new arrangements with a cool and juicy groove.

Popular nostalgic songs of all eras with a French flavor and a scent of Parisian coffee and croissant.

Celebration of the greatest hits of the 80s, the colorful and interesting decade that symbolizes the electronic pop revolution.

(A 5-piece band led by Drama teacher, Micha Hirsh, from 'Al HaBama', who's the lead singer of the group).

Pianist Dmitry Neiter plays the grand piano on the boulevard in the city center. Classical pieces by the top composers of all eras.

Great Greek classics in new arrangements with a cool and juicy groove.

Popular nostalgic songs of all eras with a French flavor and a scent of Parisian coffee and croissant.

Tunes and songs from the Jewish village, songs of Eretz Yisrael and ethnic music in a happy show that will have you dancing.

The Raanana Symphonette welcomes Shabbat in a fall atmosphere with the greatest Israeli classics.

From swing to pop - popular songs from all eras in modern arrangements that will have you dancing.