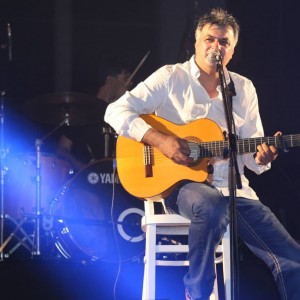 This established and successful show has already for a long time, not just been an evening of song, but a fascinating and moving social phenomenon, in which a large audience gathers around the event presenter - Moshe Lahav.

The charismatic Lahav provides his audience with an interesting and refreshing show centered around Israeli songs, breathing life back into them. Without dramatic effects and without songbooks or slides, Lahav manages to enthrall and excite the audience, evening after evening, with dialogue and music, distilling the best of Israeliness.

The show has no set structure or ready set of songs, it's all done in the moment, with an understanding of the mood of the evening, creating a different show each time.

The audience is an active participant and sets the tone of the show together with Lahav, sometimes creating a dramatic and stormy evening, and sometimes a light and flowing one.

Thousands of Israelis have already enjoyed the magic of the show and the songs, the performance, the exhilaration, the sense of "togetherness", and come back again and again for every performance.