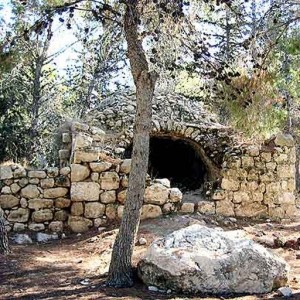 Exit right from Route 443 between Shilat and Route 1 into Ben Shemen Forest.
Enlarge map
Waze
Last Updated: over 2 weeks ago

Sheikh's grave located on a hill overlooking the Arab village of el-Midiah. Nothing is known about the sheikh (his name means "the sheikh from the west" or "the owner of the cart"), and today ultra orthodox Jews venerate the place as the tomb of the priest Matityahu, leader of the Maccabean revolt against Antiochus IV ("Antiochus of Evil").

In the 19th century the French scholar V. Guerin uncovered finds which he argued were the remains of the Hasmonean sepulchre. His proposal was widely criticized, but recently Amit Re'em, an archaeologist and resident of Re'ut renewed the excavations at the site. His findings were published in Hebrew here.

On September 24th, 1948, during the War of Independence, 23 IDF soldiers died and 51 were injured by a Jordanian-Palestinian attack on the hill top of the site ("Mishlat 219"). In a counter attack on the same day, the hill was re-conquered.

Danny Herman - Private & VIP Tours, Archaeological Expertise
3
Modiin General
Private and VIP tours to all of Israel, by an archaeologist and a tour guide. 15 years of experience and many recommendations. Lecturer at the Hebrew University, IDC, and Tour guide courses
Ben Shemen Forest
13
Ben Shemen
The biggest forest in the center of the country - right on our doorstep. 22 thousand dunams of woodland, hikes, trails and picnic areas. For map of forest please click here! Have you visited here? Send us your pictures and we'll add the bes