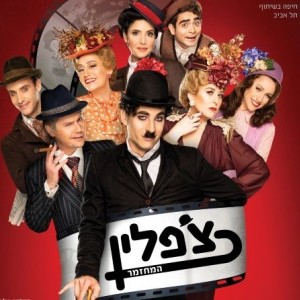 In accordance with the Ministry of Health guidelines, this event is cancelled.

The musical that thrilled Broadway is coming to Israel!

For the first time in Israel, a colorful, young, cheeky and virtuoso musical about the greatest movie star of all time, Charlie Chaplin.

The man who invented the "little tramp" character was an ambitious and controversial man, a genius in front of the cameras, domineering in his relationships and an extreme manipulator of his identity.

The magical world that he created for humanity was a compensation for his life - his poor childhood, his complex relationships with women, his worldwide fame as a cinematic genius, his expulsion from America on charges of treason and the glorious return for the Academy Award.

The man behind the magic, and the magic that transcended his human weaknesses, in a genius musical that is being performed for the first time in Israel.

Heichal HaTarbut Modiin - March 2020 Events
1
86
Nechalim
Due to the directive to prohibit the gathering of 100 or more people, including cinemas and theaters, all shows until March 21st are currently cancelled. Customers who purchased tickets will recieve an SMS text message and alternative date