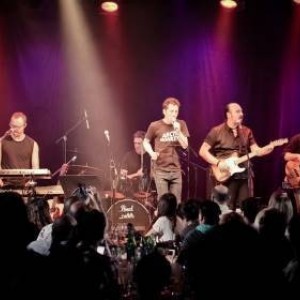 The band of actors, Idan Alterman and Alon Neuman in a tribute show filled with David Bowie's greatest songs.

A fun and exciting show that is a non-stop musical experience, with short stories about David Bowie and his work, combined with the unique humor of Idan Alterman and Alon Neuman (known primarily for their career as actors and stand-up comedians).

A new reincarnation of a show that started touring Israel a few years ago, celebrating 40 years to the release of Bowie's greatest album 'The Rise and Fall of Ziggy Stardust & The Spiders from Mars' (1972), one of the most influential albums of all-time. The show includes several songs from the album as well as many of Bowie's greatest hits from throughout his career.

Accessibility: Disabled parking and bathrooms, accessible to wheelchairs and strollers. Transportation available by request and in coordination with the hotline 106 / 08-9726020.