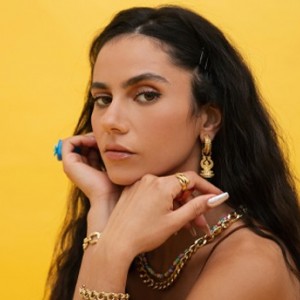 After an incredible breakthrough year, during which she conquered hearts with her debut album 'Aryeh', Yasmin Mualem finally is getting up on stage, with the performance that so many have been waiting for.

If there is anything more contagious than that virus, it's probably the crazy hug Mualem received with the release of the super hit 'Mesiba' followed by the album, which turned her into one of the most talked about musicians of 2020, with songs like 'Kama Matok', 'Kacha Adif Li' and more.

Even now, it is one of the most listened to albums in streaming in Israel, and has brought her to the attention of a wide audience, and seems to have crossed every imaginary boundary between genres and musical niches.

Since the release of the album and its extraordinary success, Yasmin has collaborated with various artists in a series of successful singles.

With an exciting world of influences and inspirations starting from her childhood home in Yaffo, where Bob Marley was played in the morning, Umm Kultoum at noon and Mozart in the evening - to her strong connection to contemporary hip hop, R&B and pop, the album, mostly written and composed by Yasmin herself, brings a new authentic voice - an uplifting, strong femininity that touches upon the least talked about places in pop culture. Singer-songwriter with beats, an addictive voice and an up-to-date and electrifying production that speaks to the emotions and the heart.