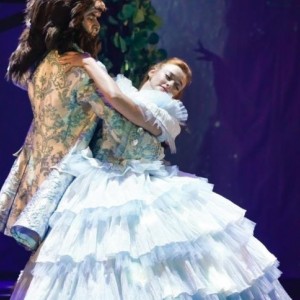 Beauty and the Beast - Children's Show [Chanukah 2021 in Modiin]

The well-known and beloved fairytale, in an original adaptation by the Orna Porat Theater, spectacular and captivating, with actors, dancers and unique video art, about the power of true friendship, inner beauty and kindness and one of the most important lessons "it is what is on the inside that counts".

During the evening of Prince Sebastian's coronation, a beggar woman arrives at the palace seeking shelter for the night from the storm outside. The arrogant prince removes her from his palace. He does not know that the beggar is a magician, who as punishment for his behavior turns him into an ugly beast, and puts both his palace and his servants under a spell.

Years later, Belle, a beautiful and kind-hearted girl, sets out in search of a magical rose that will save her family home. Miraculously she arrives at the enchanted palace and to her amazement encounters the beast.

Will Bell panic and run away? Will she be able to see into the beast's heart despite his appearance? Will the beastly prince learn compassion and kindness? Will the spell be removed?