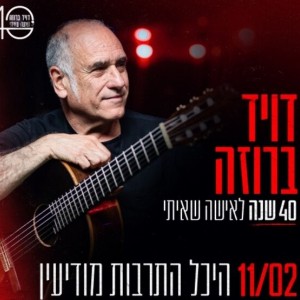 David Broza is one of the most respected and important artists in Israeli music, with a musical career that spans borders and continents.

He is known for his many hits, his dynamic guitar playing and his humanitarian activities. His special sound brings together songs in Hebrew, Spanish and English, with influences from Spanish flamenco music, American folk, rock and roll and poetry.

Broza's travels have contributed to his international sound, and his commitment to human connection, storytelling and equality.

Broza's charismatic, vibrant and passionate energy is far-reaching and has a global impact. He is an extraordinary and innovative artist in the music industry.

This year Broza received three awards for his work - the "Rimon" Yakir Award, the Israel Union of Performing Artists Award and the Shulamit Aloni Award for lifetime achievement.

The album "Ha'Isha She'Iti", Broza's third album, was released in 1983, and turned him into a major artist, in the category of Israel's top artists.

"HaIsha She'Iti", the song and the album, became huge hits and exposed him to a wider audience. During the Eighties it was the best selling album of all time in Israel.