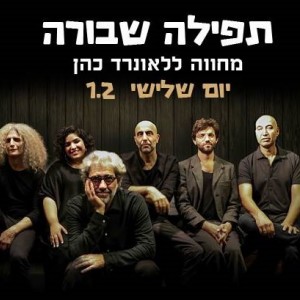 "Broken Prayer": A Journey Inside the World Of Leonard Cohen - Tribute Show at Gypsy Shilat

Journey into Leonard Cohen's world of artistic creation and prayer, from the songs of his first albums, to his farewell album that was released about two weeks before his death.

Songs of faith and doubt, songs of love and hate, songs of recrimination and consolation.

The songs are selected from all of Cohen's creative periods. From his first albums to the farewell album, with the monumental "Hineni".

The songs are performed in English and Hebrew, and between them the story of his life is unfolded, the searches and yearnings of a phenomenal creator.