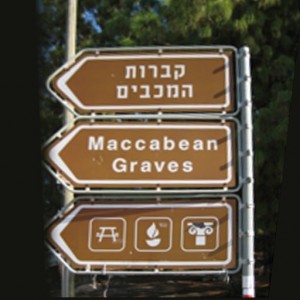 Exit right from Route 443 between Shilat and Route 1 into Ben Shemen Forest.
Enlarge map
Waze
Last Updated: over 2 weeks ago

A site located along Highway 443, especially popular during Chanukah, because of a century-old tradition that these are the graves of the Maccabees.

In fact, the tombs are from about 500 years later than the days of the Maccabees.

The misidentification is mainly because of the Arabic name of the site ("Kubur al Yehud" – "tombs of the Jews") and because it is positioned next to an Arab village named "El-Midiah", which seems to echo the name of the ancient hometown of the Maccabees - "Modi'in".

In reality the site does not bear any resemblance to the tombs of the Maccabees as described by historical sources.

According to the "Book of the Maccabees" the tomb had seven pyramids, and was decorated with reliefs showing weapons and ships. "Kubur el-Yehud" does not bear any remains of pyramids or ornamentation.

Some suggest the tomb of the Maccabees are at nearby "Sheikh Gharabwi" (Horbat Ha-Gardi) site, and others locate the Hasmonean tombs near "Umm el-Umdan".

The ancient Modi'in itself has been located in a variety of places by historians - in the vicinity of the tombs, at Titora Hill, at "el-Midiah", or at "Umm el-Umdan", or at all the sites combined (see YNET article in Hebrew on this here).

Danny Herman - Private & VIP Tours, Archaeological Expertise
3
Modiin General
Private and VIP tours to all of Israel, by an archaeologist and a tour guide. 15 years of experience and many recommendations. Lecturer at the Hebrew University, IDC, and Tour guide courses
Ben Shemen Forest
13
Ben Shemen
The biggest forest in the center of the country - right on our doorstep. 22 thousand dunams of woodland, hikes, trails and picnic areas. For map of forest please click here! Have you visited here? Send us your pictures and we'll add the bes