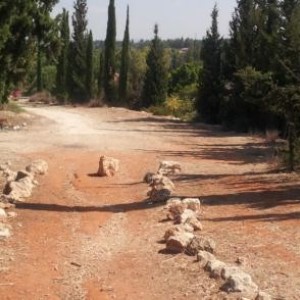 Next to Maccabim
Enlarge map
Waze
Last Updated: over 2 weeks ago

Hill reaching 289 meters above sea level, visible from afar due to the line of Cypress trees (Broshim) that circles and crowns its top and North-Western side.

At the top of the hill is a wide, level open area with the remains of a single structure called Khirbet Umm Rujman. According to some sources, the area was used as a tree nursery and the structure was used as a family summer home.

Up to a few years ago it was possible to see the first floor of the structure almost in its entirety and a beautiful arch which led to the second floor.

During the War of Independence the hill played a role in 'Mivtza Dani' and in discussions between Israel and Jordan brokered by the UN on the ceasefire lines.

From the top of the hill there is an impressive view to the east of the northern part of Emek Ayalon, the hills of the upper Shfela, the foothills of Bet-El, and the north-western foothills of the Jerusalem hills.

Givat HaBroshim is a nice example of the combination of orchard and natural plants. Today, the area is seasonally used for goat herding. According to archeological findings, the area was used for growing grapes and olives in ancient times.

During the winter and spring the hill is covered by an abundance of flowers including daffodils, cyclamen and anemones.

In March 2015 a viewing point was inaugurated on Givat HaBroshim in honor of the 15th Chief of Staff and resident of the city, Amnon Lipkin-Shahak.