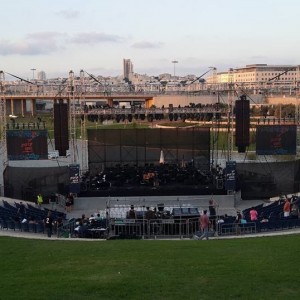 Open-air amphitheater located in Modiin's main park, offering approximately 1,000 plastic seats and another 7,000 seating spaces in the grassy area behind the seats.

There is also a space between the front row of seats and the stage, allowing some of the audience to stand and dance near the stage.

The amphitheater is located on the south side of Park Anava near the lake, and overlooks the city center of Modiin and extensive parts of its northern neighborhoods.

In the spring and summer months, from around May until the Tishrei Chagim, the amphitheater is generally used for large music shows and shows for children, organized by the Modiin Maccabim Reut municipality at no charge, as well as movie screenings and screenings of major international sports events (World Cup, Euro etc.).

The closest parking lot to the amphitheater is the southern parking lot on Sderot HaChashmonaim (under the Tziporim-Mesuah bridge). The car park requires payment on Sundays to Thursdays from 06:00 to 21:00 (the first two hours are free for city residents upon presentation of a parking permit).

Please note that for large events the car park fills up quickly, so it is recommended to walk or park in the open car park on Lev Ha'ir Street (opposite the mall) or on the streets in the Tziporim or Mesuah neighborhoods near the bridge that connects them, and is above the nearest entrance to the amphitheater.