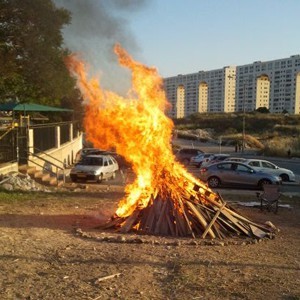 The full list of areas permitted by the Iriya for the lighting of Lag B'Omer bonfires in Modiin Macabbim Reut.
08-9726... Show 08-9726217
Warning! This page is currently disabled, and may contain out of date information
sponsored
Last Updated: over 2 weeks ago

In accordance with the Ministry of Health guidelines, this event is cancelled.

In the framework of the Iriyah's preparation for Lag BeOmer the areas in which bonfires may be lit have been designated.

Lighting bonfires will only be permitted in open areas at a distance from city neighborhoods and homes.

Bonfires may be lit on the following days only:

During the days of the bonfires there will be increased surveillance by the municipal and security departments.

Security patrols will not allow the lighting of bonfires in areas within city neighborhoods and next to homes.

Lighting bonfires in unpermitted areas will not be allowed.

Bonfires lit in unpermitted areas will be put out and the persons who lit the fire will be dealt with and fined by the police.

In areas with a large amount of people and bonfires that may endanger those attending, entry will be forbidded to additional participants and no additional bonfires will be permitted.

Vehicles will not be permitted to enter open areas where bonfires are lit.

Guards will be stationed at unpermitted sites to prevent bonfires being lit.