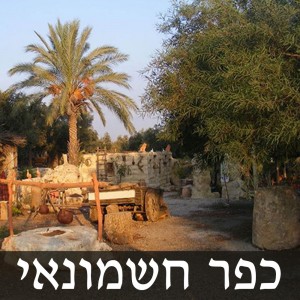 Fixed 10% discount for ModiinApp users on all activities when you visit the village!

Part of the app's "Fixed Discounts All-Year Round" category.

No duplication on offers.

Range of interactive and fun activities for children and adults, portraying daily life in the land of Israel in ancient times, including a guided tour of the sites of the reconstructed village.

The Hasmonean village is located on a hill overlooking Shilat near the large shopping centers. It presents a large-scale reconstruction of daily life in different time periods in Modiin.

Activities for families on Fridays, and school vacations

Cost: 50 ₪ per participant (age 4 and up) in cash. Registration required.

Call for special prices for groups of 25 or more participants.

Celebrating birthdays like in the Hasmonean times (!) with guided activities, suitable for ages 6-12.

Series of six lectures on fascinating new findings, yet unrevealed to the public, about the Modiin area, with geographer and local researcher Zohar Baram.

Option to sign up for individual lectures. Discount when signing up for full series.

Tours for adults (for companies, organizations, groups from abroad and pensioners)

Get to know the way of life and culture of the Second Temple period, the Mishnah and the Talmud, as well as the story of the new settlement in the region and the legacy of the Maccabees from Modiin.

The activity includes a tour of the reconstructed buildings in the Hasmonean village of Shilat, to learn about the ancient working methods of the farmers of the Second Temple period, as well as the buildings that characterized every settlement.

Guided tours in the Modiin area

Fascinating tours with the geographer Zohar Baram, founder of the geographic-historic research of the Modiin area, presenting the history of the Maccabees and the Roman Empire in the region.

Lecture: 'What you didn't know about the revolt of the Maccabees'

History of the revolt and the Hasmonean state, with all details, not known to the general public.

The lecture is approximately one hour.

Suitable for high schools, organizations and companies, groups of Olim and pensioners.

Pictures that look like picture postcards, full of atmosphere against the backdrop of the ancient landscape in the village, the surrounding forest and nature views from the hill. Reasonable prices!

For a review on the English blog 'Israel - Best Trips' click here.

See you soon at Kfar Chashmonai!

Tours every Friday and during school vacations.

Birthdays and special tours can be booked for any day of the year, by prior arrangement.