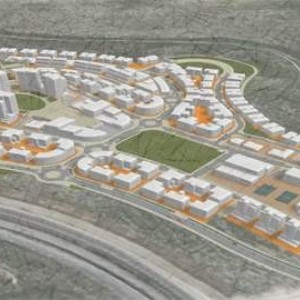 Situated in the heart of a green hill, a few minutes away from Modiin Maccabim Reut's main entertainment and shopping venues, the Nofim neigborhood will include around 1,850 apartments, as well as commercial areas, educational and public buildings.

Sales in the Nofim neigborhood

The Nofim neigborhood is the first neigborhood on the market in the framework of the wider residential building plan which the state and the Modiin Maccabim Reut municipality are promoting, to build three additional neighborhoods, that are in various planning stages and will ultimately include around 12,00 housing units.

The new neighborhoods, whose constructions is expected to start in the first quarter of 2015, will be accompanied by investments in transportation and municipal buildings, such as the construction of a new road (180) and its connection to road 431.

The neigborhood, which will cover around 955 dunams, will include an additional 9,500 square meters of commercial and business space, ganim, elementary and high schools, public buildings and green areas that will look over Park Anava and will connect to adjacent neigborhoods with bridges and underpasses.

The Nofim neighborhood was named based on its topographical location, on a relatively high elevation, with incredible views over the city's neigborhoods and the Shfela area. The neighborhood's streets will be named after various geographical areas of the country.

The results of the tenders ('michrazim') for the thirty building projects in the neighborhood, for which dozens of 'purchasing groups' applied, are meant to be published at the the end of November 2014.

The Mayor of Modiin Maccabim Reut, Chaim Bibas: "The Nofim neighborhood is the first neighborhood being marketed for building since the Israel Lands Authority, the Ministry of Construction and Housing, and the Ministry of Finance signed with us on the umbrella plan to market 11,800 residential units in the city.

The municipality has set itself the goal to grow the city and the services to the residents, with the intention of lowering the housing prices in the city for young couples, and is doing so by enlarging the number of apartments on offer in the city and the expected growth of the city as a result of this is expected to cross the 100,000 mark."

The model of umbrella agreements with local authorities is a process that was promoted towards the end of 2013, and in its framework the policy of land allocations by the Israel Lands Authority was updated, in order to allow the marketing of land for a large number of housing units thanks to early financing by the state for the local authorities. Through this model the Authority is seeking to accelerate the pace of construction on lands which were sold to developers for projects of more than 5,000 residential units, eventually leading to a decrease in housing prices.

With the signing of the umbrella agreement with the Modiin Maccabim Reut Mayor, Mr, Chaim Bibas, the Israel Lands Authority committed to pass over to the municipality according to building stage, the budget for the development of the neigborhood, a cost of around 450 million shekels, while the municipality will take responsibility for the planning and building of public institutions according to the schedule.