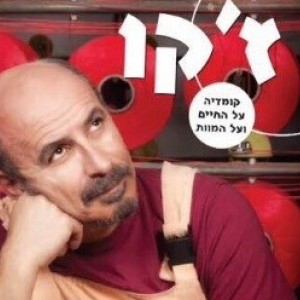 On a cloudy day Jacko Nachmias is fired from his job, finds out he was adopted, and sterile, that his wife is pregnant by his best friend and that he forgot to send in the lottery form with six correct guesses.

After he publishes a death notice for himself and discovers that nobody is interested even in his funeral, he decides to rid the world of his presence.

He arrives at the world to come without prior notice, and the receptionists are out to lunch. A moment before he is booted out of there too, Jacko gains enlightenment that turns the bent and broken man into a lion.

He returns to our world for one more week of life, and takes cruel revenge on all who have ever wronged him. He very quickly understands that it's all for nothing, and that the power of love is greater than the power of hate.

Production by the HaBima Theater.