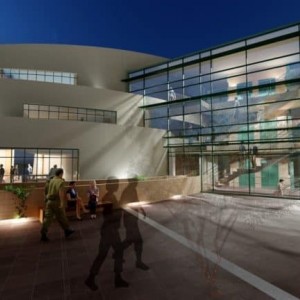 The home was founded in 2015 by the family and friends of Modiin resident First Sergeant Almog Asael Shilony ז"ל, who was killed in a knife attack in Tel Aviv.

At the beginning of 2019 a successful fundraising campaign was concluded for the establishment of a new building for 108 soldiers.

On November 10, 2014, at 12:10 in the afternoon, at the Hagana train station in Tel Aviv, a Palestinian terrorist attacked First Sergeant Almog Asael Shilony הי"ד, from the back with a long butcher's knife. Despite being taken by surprise, Almog fought him with all his might and used his body to protect his weapon, until his last breath, thus preventing a much larger attack. Almog was fatally injured and died of his wounds.

His family decided to commemorate him by setting up a home for lone IDF combat soldiers, as Almog would bring home lone soldiers during his army service, and give them, even for just one Shabbat, a feeling of home and family. In this way, they are carrying out his unwritten legacy.

Each soldier living in the home has a room with a cupboard and bed, as well as a kitchen, shower, washing machine and everything else they need. In addition, the soldiers have families that care for them and make sure they have everything they need.

Once the soldiers are discharged, Beit Almog hires private tutors to help them matriculate, apply to university, provide career guidance and counseling, thus giving these Lone Soldiers the best possible chance of success.

In February 2019, a successful crowdfunding campaign was concluded for the establishment of a new building for 108 soldiers with a shared space including seating areas, a gym, a sports court, kitchen, joint dining room and shul.

Residents and families interested in donating and helping are invited to get in touch.

Amutot and Charities
Also on ModiinApp...