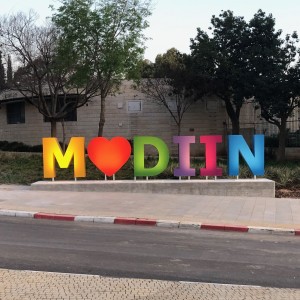 The city center, which is planned to be the city's main leisure and recreation area, features a kilometer-long avenue (Sdera) with wide sidewalks, walkways, parks, benches, water fountains and more.

In the center of the avenue, there will be five eateries (four of which are already open): a kosher meat restaurant Kasba, from the owners of Caffit Modiin; a branch of the Pasta Basta chain from Machane Yehuda; burger restaurant ASAP, and pizzeria Bastard - both owned by the successful local pub, 'More Than Bar'; and the first Modiin branch of the national chain of ice cream parlors from Nahariya Leggenda.

Dozens of additional business will operate on both sides of the avenue, some of which are already open (for full list click here!). All businesses in the city center will be permitted to be open 24 hours a day, 7 days a week.

The new avenue will create an urban continuum for pedestrians, and will connect all the main sites of the city center: Kikar HaTachbura (the public transportation circle), Anava Park, Modiin's central railway station, Azrieli Mall and various public buildings.

At the bottom of the avenue there is a crossing to Azrieli Mall, and there will also be a square and an area designated for the establishment of a city market.

Other institutions and attractions

As part of the construction of the city center, an underground car park for about 500 vehicles has opened, providing parking for visitors, along with the other existing public car parks (the Iriyah car park and the various train car parks) and the nearby streets.

Approximately 470 housing units are being built along the avenue in buildings of 5 floors, with the bottom floor as commercial space, including stores, restaurants, pubs and cafes. Above them are 4 floors of residential space, with around 60% 2-3 room apartments and the rest 4-5 room apartments.

On the side of the avenue facing Arar and the continuation of Dam HaMaccabim, there are buildings with two floors of retail stores and offices, with 3 additional floors of residential space above them.

The cafes and restaurants on the avenue will be surrounded by tall shady trees, which were purchased by the municipality several years ago to grow to the required height to provide shade for those spending time on the avenue, as well as the shade of buildings on both sides of the street, that create shaded areas for most of the day.